THE INTERNET: how it pulls the world together (part 1)

() - HIDING in his dorm room, Virginia Tech freshman Bryce Carter did what anyone his age would do in a time of crisis - he blogged. First, he assured friends that he was alive. Then he posted a video he shot of police cars gathering outside and still photos of sharpshooters.

'My friends could be dead,' he typed on Bryce's Journal, which is usually dedicated to partying, the environment and sports.

Members of the most wired generation in history dealt with Monday's bloody campus rampage by connecting on blogs, Facebook and other websites. Their eyewitness descriptions, photos and video made the trauma unfolding in the rural town immediate and visceral to millions.

Thousands of kilometres from the shootings, University of Southern California (USC) sophomore Charlotte Korchak received a call from her mother in - Virginia Tech, she learnt, was a death scene. Rather than tie up the mobile phones of friends who attend the school, the 19-year-old history major checked their pages on Facebook, the social networking site.

'I was able to immediately find out who was okay,' she said. 'Without Facebook, I have no idea how I would have found that out.'

Every tragedy now seems accompanied by an outpouring of grief and solidarity on the Internet - a fire hose of news, rumour, photos, mobile phone videos and instant opinion. So was the case on Monday, as the death toll climbed to 33 at the Virginia Tech campus.

By Monday evening, more than 16,000 had flocked to Facebook's 'April 16, 2007 - A Moment of Silence' discussion group. Other impromptu memorial groups drew thousands of members each.

'Since the launching of Facebook, there is probably nothing that has impacted the college audience as this has,' said a spokesman for the website.

On Monday, TechSideline.com, a website for fans of Virginia Tech sports, turned into a makeshift meeting place where visitors could seek word about loved ones.

'It allows you to feel closer to the situation,' said Mr Robert Niles, editor of the USC's Online Journalism Review and a former Rocky Mountain News reporter who covered the Columbine killings. 'To see that there is a functioning community is very reassuring to people who are disturbed by something as horrible as this.'

As the story broke, users of Digg, a popular news sharing site, posted stories by CNN and ABC News, then returned to those posts to share fatality counts, warm wishes to survivors, condolences to families of the dead and links to a mobile phone video recorded by a Virginia Tech student outside Norris Hall as the shooting happened.

'What this link became was a place to learn what happened in the last five minutes,' said Mr Jay Adelson, chief executive of San Francisco-based Digg.

Virginia Tech civil engineering student Anthony Le, 19, kept his ear pressed to a police scanner all morning as the drama unfolded, then posted whatever information he learnt on Digg.

'The count of the fatalities was a lot slower on CNN than on Digg,' he said.

An 18-year-old student identified as Carter had headed for his dorm as gunshots rang out and a message started blaring over the campus loudspeaker, saying: 'This is an emergency. Take shelter indoors immediately. Stay away from windows and remain inside.'

He managed to make two calls before the cellphone networks jammed.

'We did not know anything,' he said. 'So we kept trying to find out things online.'

He then began to blog, and as the death toll mounted at 12.40pm, he wrote the words: 'We topped Columbine, please God, have none of them be my friends.' 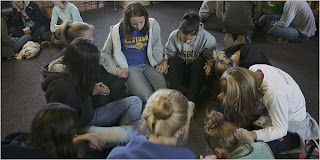 People of a nearby church praying in the above picture^

The article above is about the Virginia Tech shooting incident which took place on the 16th of April 2007, this year. The article states that the students, friends and people related to the staff and student body of Virginia Tech turned to the internet for information when they heard about the shootings and wanted to know more. The Internet is a worldwide, publicly accessible network of interconnected computer networks. It is a "network of networks" that consists of millions of smaller domestic, academic, business, and government networks, which together carry various information and services, such as electronic mail, online chat, file transfer, and the interlinked Web pages and other documents of the World Wide Web. It is easily accessible as long as one has a computer and suitable internet access, and allows information to be transferred and read by anyone in the world. Over the years, the number of users of the internet has increased significantly as shown in the graph below. This shows the high level of technology attained by mankind so much so that people turn to the internet for information and news rather than to normal newspapers, or even television. 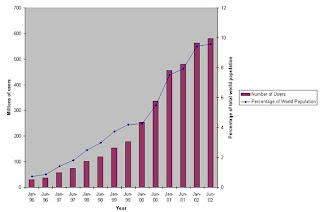 As stated in the article above, those people who turned to the internet for information used blogs, Facebook, the social networking site, TechSideline.com as a makeshift meeting place where visitors could seek word about loved ones, and Digg, a popular news sharing website. It is stated that Virginia Tech freshman Bryce Carter did what anyone his age would do in a time of crisis - he blogged. First, he assured friends that he was alive. Then he posted a video he shot of police cars gathering outside and still photos of sharpshooters. 'My friends could be dead,' he typed on Bryce's Journal, which is usually dedicated to partying, the environment and sports. Bryce’s journal can be accessed at http://ntcoolfool.livejournal.com/. This is a blog which touched many people’s hearts and provided many with information from the point of view of a Virginia Tech student. The online community has provided many tributes to the victims of the shootings, in addition, social network communities have set up forums for discussion and the sharing of information of this terrible incident. For example, many people have posted their thoughts, condolences and information videos on youtube.com, which is an internet video sharing community. 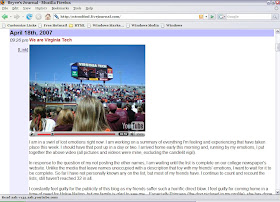 A view of Bryce's blog^ 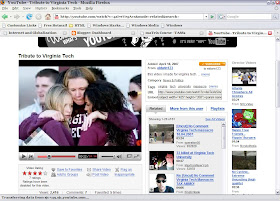 A view of youtube.com^

The fact that people are turning to advanced technology on the internet for information, support groups, and discussion forums instead of not-so-advanced technology like the telephone, shows that the people have well-acquainted themselves with the internet. This bonds people as one body with a common interest, which in this case, is to offer support discussion and information about the shooting incident. The internet allows for interaction in every direction, accessible to anyone. It is clear that the technological advancement of the internet has rendered state borders meaningless. The degree of technology allows for the freedom of information where by people are connected, free to receive and give ideas. In this state of global disorder it has become evidently clear that the world is interconnected through a complex web of transnational networks. Global interconnectedness is also what distinguishes the Internet, a medium that allows people to communicate and interact with one another, regardless of physical proximity. Generally defined as the network of networks, the Internet can help us understand the world we live in, a world in which the growing significance of boundary-crossing networks is forcing us to reconfigure our societies as interdependent parts of a global whole. With the internet, information can be received and transmitted all over the world, with just a single click of the mouse, pulling many people of the world together as one in the internet community, thus encouraging globalisation.